The sprue bush is defined as that part if the mould in which the sprue is formed.In practice the sprue bush is the connecting member between the machine nozzle and the mould face,and provides suitable aperture through which the material can travel on its way to the impressions or to the start of the runner system in multi-impression moulds.

The sprue  bush is fairly hightly stressed in some applications and should therefore be made from 1.5% nickel chrome steel and should always be hardened.Noted that while initially the nozzle may have been set up correctly,an increased in the injection cylinder temperature will cause a fairly high force to be applied to the sprue bush has between 2° and 4°included taper，which facilitates removal of the sprue from the mould at the end of molding cycle.For regerence,2;2.6;3 and 4 are the ubcluded tapers adopted by various standard parts suppliers. 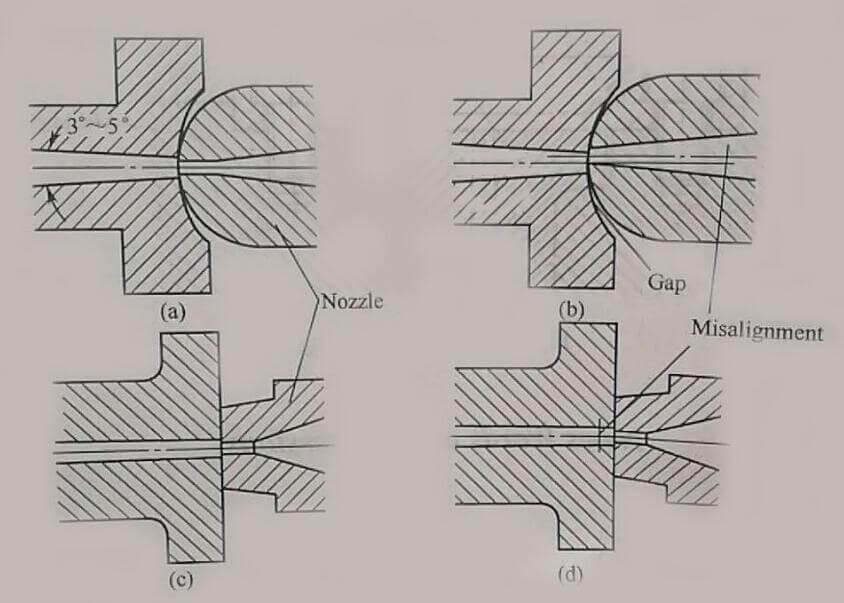 Proving the alignment between the nozzle and the bush apertures is perfect,a leak-free joint is achieved with the spherical seating.It should be noted that the radius on the nozzle is slightly less than that in the bush,which ensures both parts are in physical contract at the apertures.However,if the nozzle and sprue bush are slightly out of line(due perhaps to wear on platen bushed)a gap will result and leakage behind the mould will develop(Figure 5-1(b)).This drawback is not present is slight misalignment occurs at the seating of the sprue bush and flat-faced nozzle(Figure 5-1(d)).

As can be seen,no leakage can occur if the two aperature are slightly out of the line and no restriction to flow will occur either,providing that the sprue bush has an aperture slightly larger than that of the nozzle.An allowance of 0.8mm on diameter is usually made.

The register ring is a circular member fitted on to the front face(and often also to the rear face) of the mould.Its purpose is to register(or locate)the mould is its correct position on the injection machine.

When the mould is mounted on the machine the front mounted register ring fits into a circular hole which is accurately machined in the injection plated on the cylinder-nozzle axis.This ensures that the samall aperture in the nozzle is in direct alignment with the sprue bush.Now,since the sprue bush is the connecting member between the machine nozzle and the mould face,this alignment of nozzle aperture and sprue bush hole permits an uninterrupted flow of material from the cylinder,through the nozzle and sprue hole into the mould runner system.The register ring,in fact,forms a direct connectiobn between the sprue bush and the hole in the injection platen of the machine(Fingure 5-2) 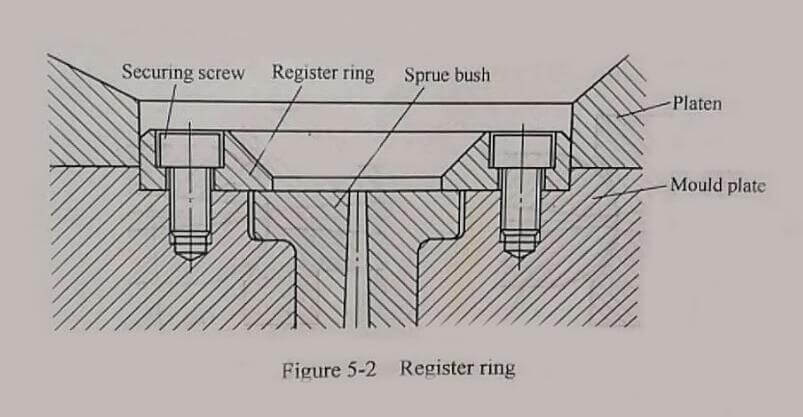 How to identify plastic material

The following are the identification methods of several commonly used

Why you need mold for customizing your plastic producs?

Why you need mold for customizing your plastic producs?